A few months ago, my family planned on visiting my dad’s older sister up north and as the proposed date kept inching closer, the trip kept getting rescheduled. Finally, this past weekend, we finally made the drive to see her and her family.

If you must know, my family is really big on “planning to leave early but really leaving two hours as planned” when it comes to going out of town (mostly with my dad and younger brothers). We were supposed to meet up with my dad’s younger sister in Burbank by 4AM, but we ended up leaving the house at 6:30AM. Our first rest top was in Arvin, CA at 8:10AM where we met up with my aunt at a Starbucks. 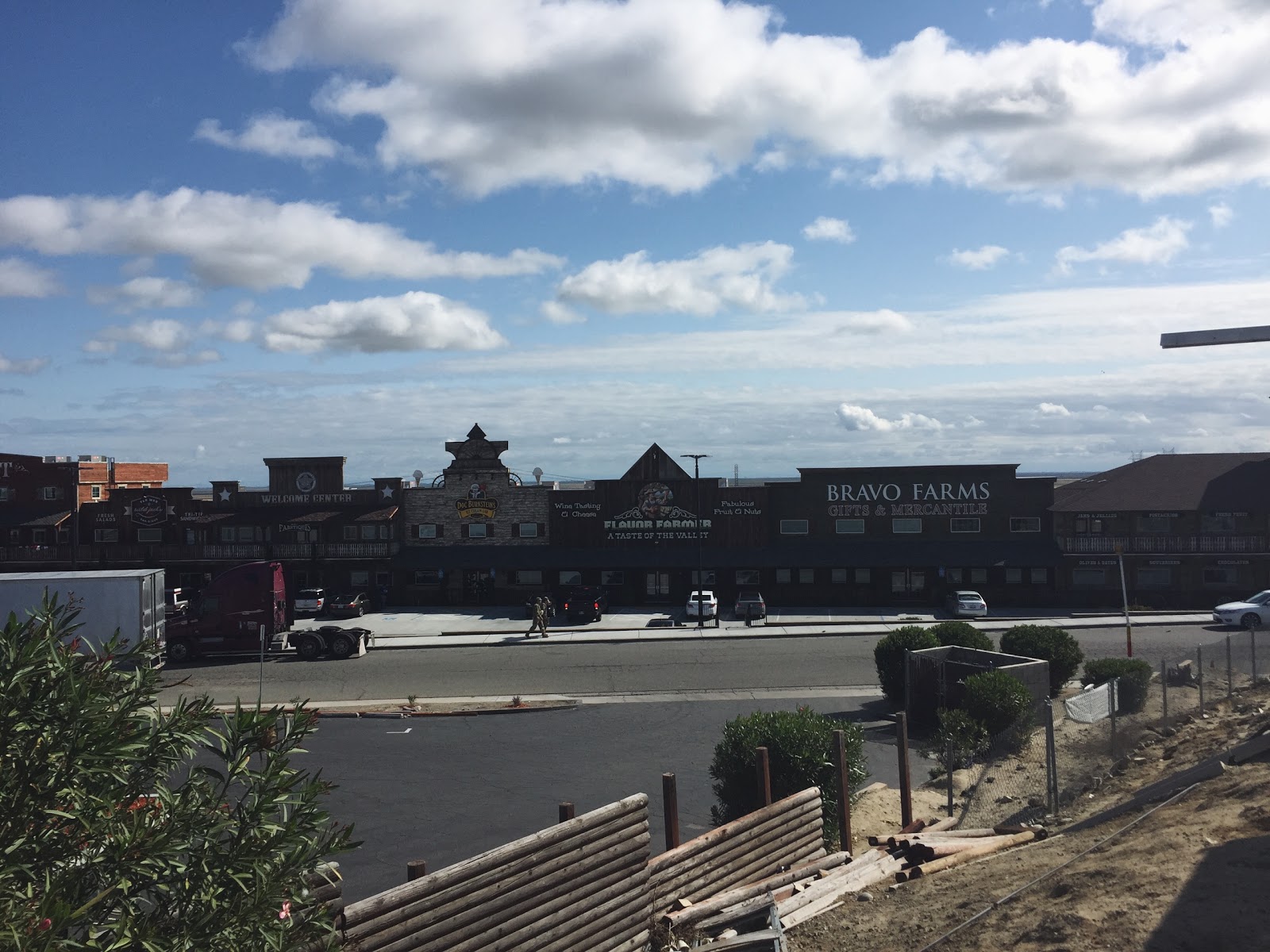 Kettleman City, CA (10:45AM) – this was the view from our second stop. This place seemed oddly familiar but I believe years ago, we visited a different establishment of Bravo Farms. 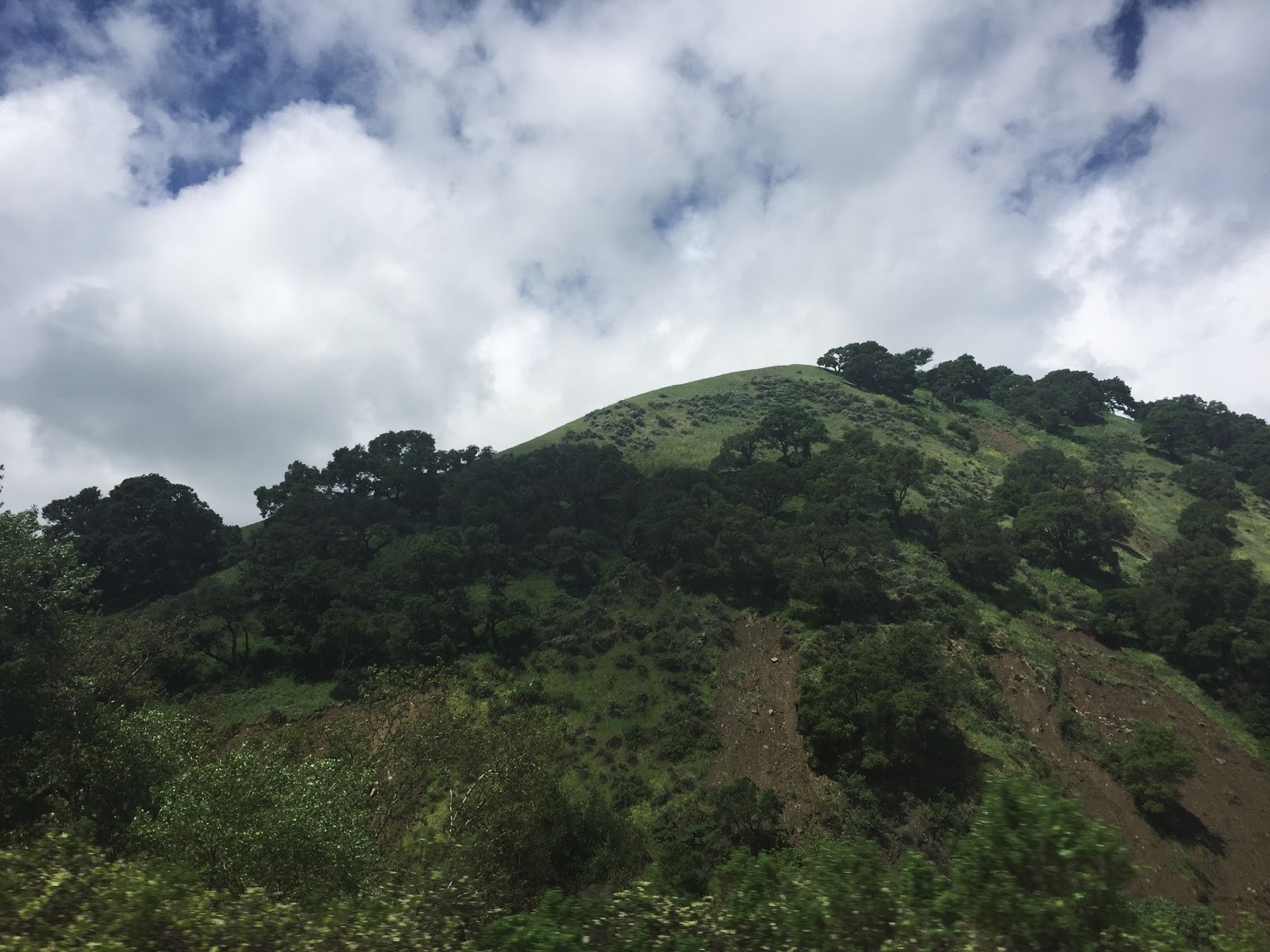 Fremont, CA (12:51PM) – coming from Southern California, I was really excited to see how green the scenery was! Obviously the drought didn’t affect the northern part much. 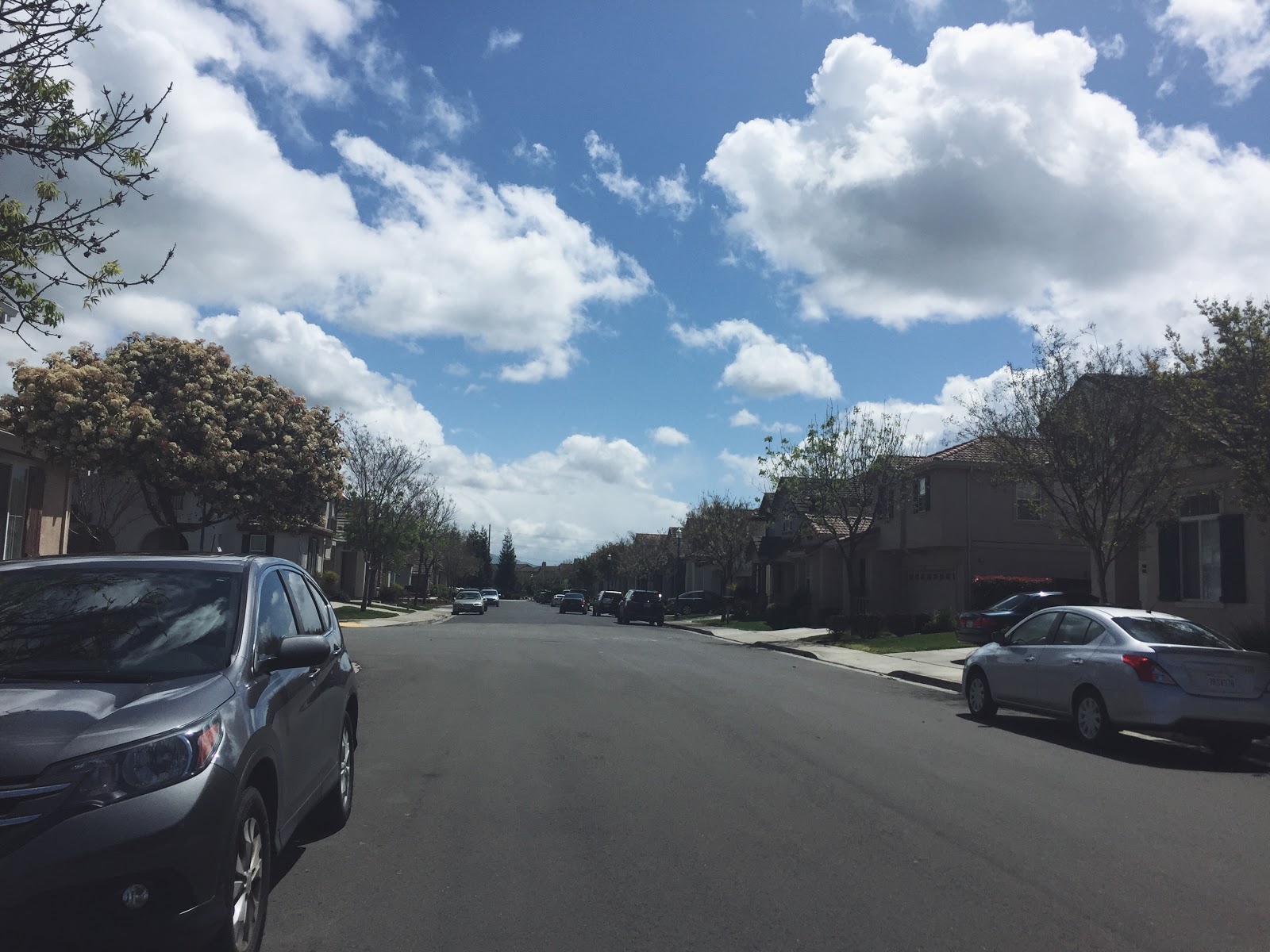 Union City, CA (1:11PM) – when we arrived my aunt’s place, I just had to take this photo because the clouds looked so perfect!

After we finished unloading the car and assigning rooms, everyone took a nap while my brothers and I played with the family cat, Darwin. I haven’t seen him since 2008 and he’s definitely gotten even more fluffier than before. By 5:00PM, we set out to church to do the Saturday mass for Palm Sunday. Afterwards, we stopped by Slap Face Coffee & Tea. 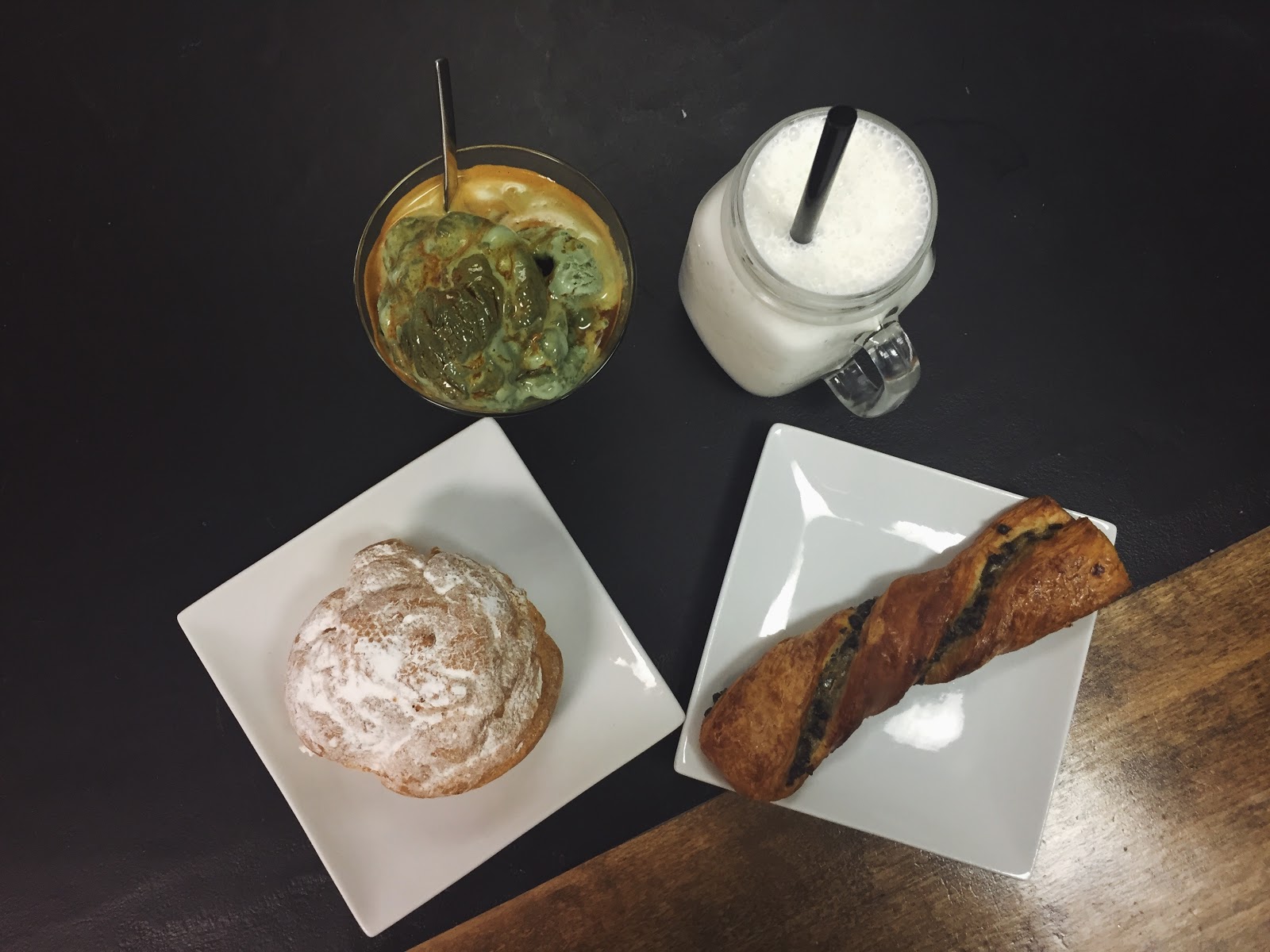 I think Slap Face’s signature latte was their red velvet latte, which I didn’t get to try! I did have their green tea affogato – it’s a coffee-based dessert where you get a scoop or two of your ice cream choice and they drown it with espresso. This dessert was perfect; however, the espresso was so hot that it melted my ice cream almost instantly so I pretty much just drank it like a smoothie. We spent a good hour here and we got into a really intense family game of Jenga where the loser had to do 50 push-ups (my uncle lost!).

Afterwards, we had a slightly late dinner at Tribu Grille, a Filipino restaurant with a live band. Their food was good despite the small portions but the service was terrible. They kept dropping off wrong orders on our table and it took forever for the food to arrive; however, the band playing that night was decent. I have decided though that I am not a big fan of live bands in restaurants – I’d rather eat in silence. Unfortunately, the food didn’t sit too well in my stomach, and I found myself awake at 3:00AM in the bathroom trying to keep the food in.

We left the next day at 2:45PM after having some pizza and a family game of pool. My brothers and I won $25! 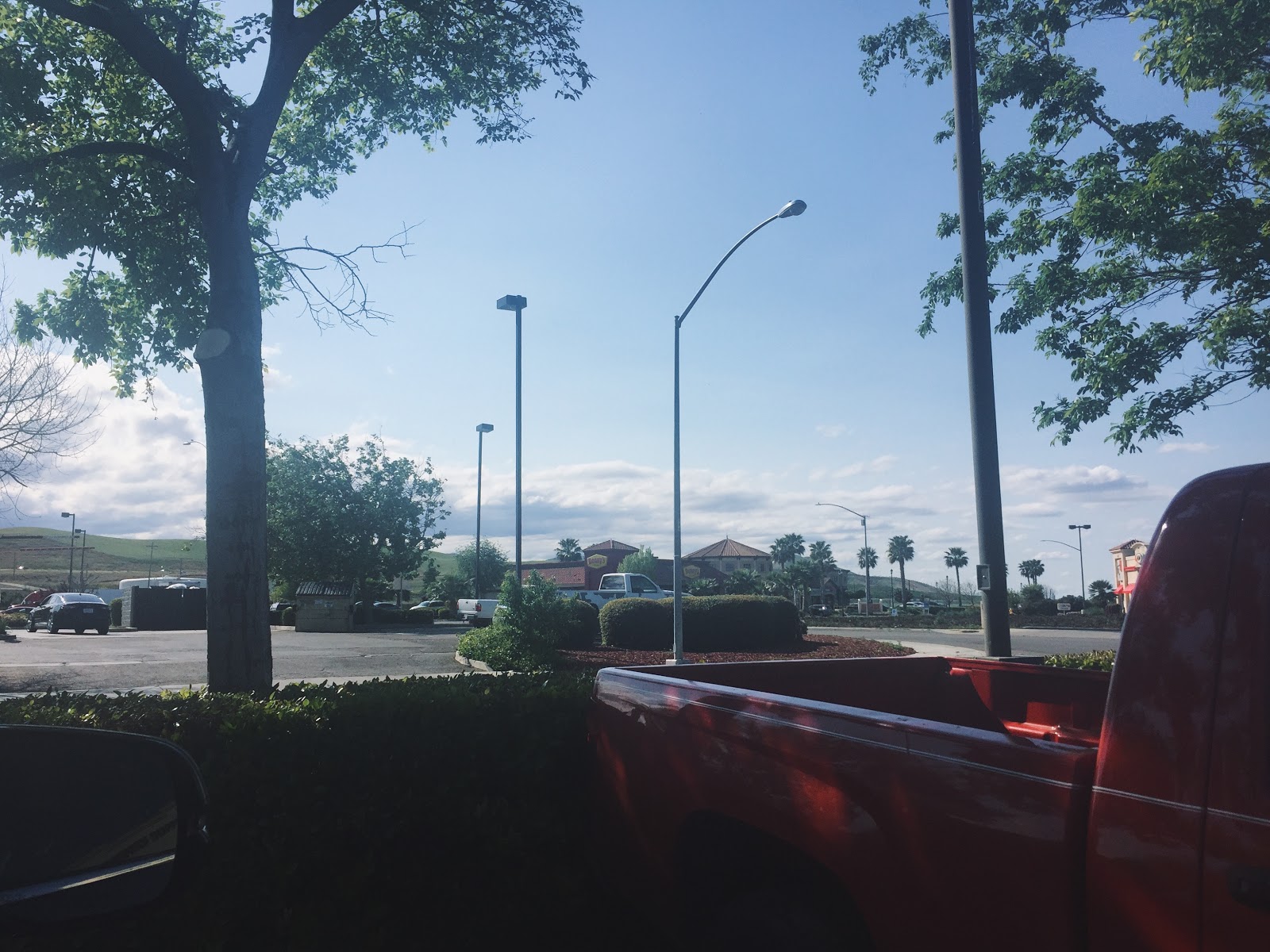 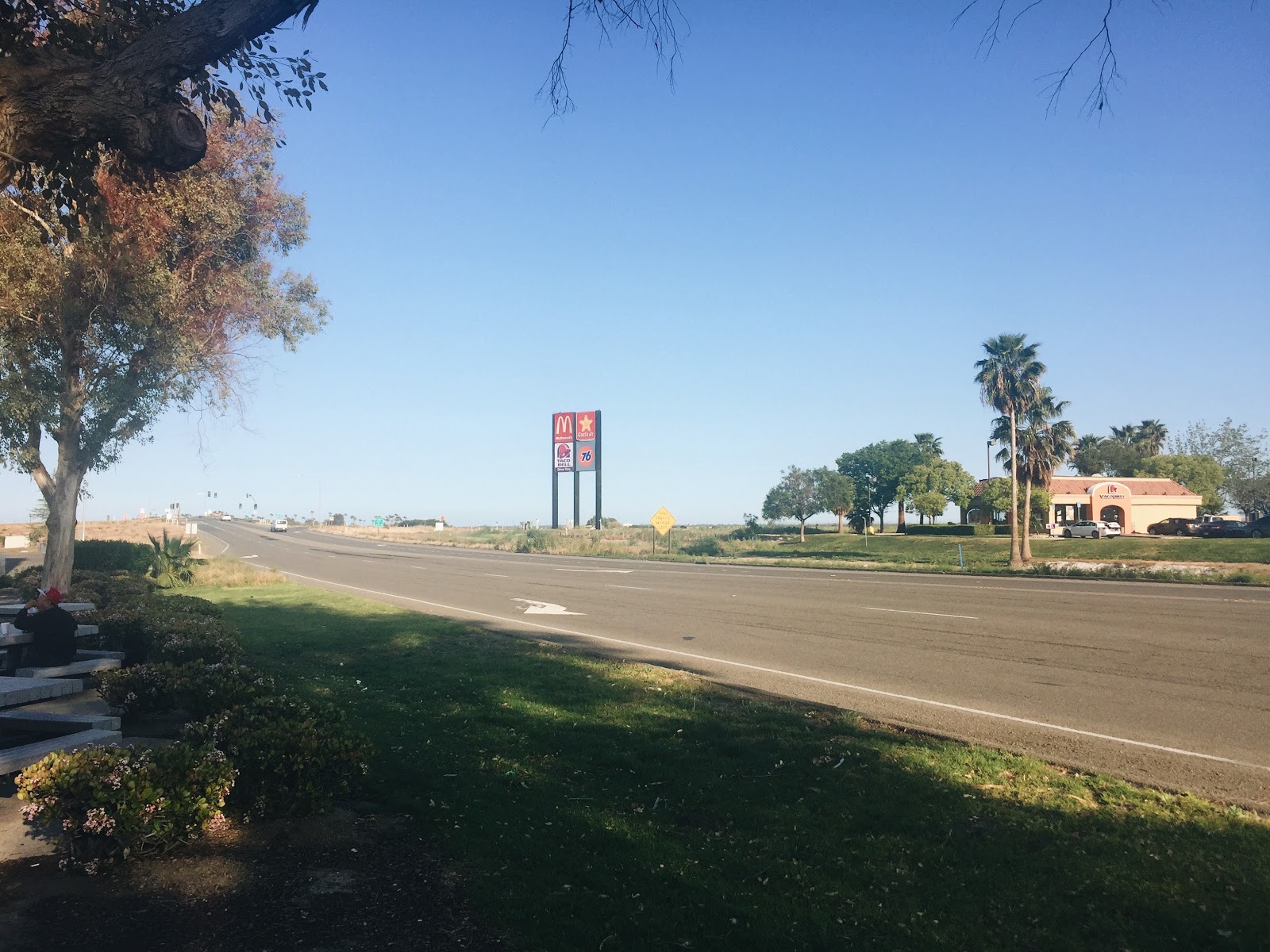 Coalinga, CA (5:51PM) – we stopped by Coalinga for gas. Made plans to have dinner at In-n-Out in Arvin, CA.

Truthfully, I enjoyed snapping pictures of the places we had stopped at and taking note of the cities. I’ve never really done this before and I’m actually looking forward to another trip so I can do it again. Looking at all the photos, I’m rather amazed at how cities look so different from each other.

We arrived home at 10:01PM. I’m almost positive I gained the 5 pounds I had recently lost in a span of twenty-four hours. Hope your weekend didn’t consist of sitting too long in the car!

Highway to the Danger Zone

sorry TLC, we chased the waterfall

my cousin (@angiesievert) & I originally had plans

first hike of the year was a complete success! and

Merry Christmas from my family to yours & from Jaz

after eight years, Chris & I finally tied the knot